HOW CAN I INCREASE THE RANGE OF MY RC QUADCOPTER? How Can I Increase The Range Of My RC Quadcopter?

Securely and steadily accomplishing a wide range is, understandably, very important for any drone pilot that wants to keep the fun to the limit.

When taking in count the longest range of your setup, the following key factors will be crucial for what you can achieve:

1. The positioning of the control and the drone, including obstacles in the space between them

However, that’s only half the truth as even obstacles that are not directly in the line of sight have a significant impact. More specifically, any obstacles in the “Fresnel zone”, will impact range.

In simple terms, the Frensel zone is an area the shape of a rugby ball between the transmitter and the receiver. To achieve the best link this area should be free of obstacles. The following diagram illustrates this point.

So, if your signal is getting weak, many times all you need to do is fly a bit higher and clear your Fresnel zone.

2. The relative orientation of the control and the drone

This point is applicable to linear polarized antennas which, at the time of writing, comprise all of the antennas available for the Phantom, Mavic and Inspire.

When using such linear polarized antennas, it is important to keep the receiving and the transmitting antennas in the same orientation, for example, both vertical (pointing up).

However, this may not always be possible. For example when the drone banks this may introduce a 45 degree orientation mismatch which will result in a significant signal degradation.

This is where it gets interesting… In this section we’ll discuss the radiation pattern and gain of antennas.

Each antenna has a specific radiation pattern. Some antennas will broadcast (or receive) equally in all directions (in which case the radiation pattern is a sphere centred around the antenna) while other, highly directional, antennas will only transmit (or receive) in a narrow cone in front of them. A good example of a directional antenna is the typical TV aerial which needs to be pointed in the right direction to work.

The impact of gain is huge. For example, other things being equal, a 2dB antenna on 2.4GHz will give you a range of 6km while a 16dB Yagi antenna will increase this range to 33km.

The standard DJI antennas are low gain, meaning they receive broadly equally well in all directions.

The choice of radiation pattern depends on your style of flying (e.g. a long range flight in the same direction or a shorter range flight around the pilot) and your equipment (e.g. an antenna tracker will enable a directional antenna to always point to the plane).

In addition to directionality, examining the radiation patterns will reveal other considerations the pilot will need to take into account. For example, even unidirectional antennas typically have a doughnut shaped pattern, with a low-sensitivity area right above and below them. As such it is common for the video signal to be weak when flying directly over the pilot.

The following diagram provides an illustration of the differences between omni and directional antennas as well as two representative actual radiation patterns (“vertical”, as seen from the side and “horizontal”, as seen from above) 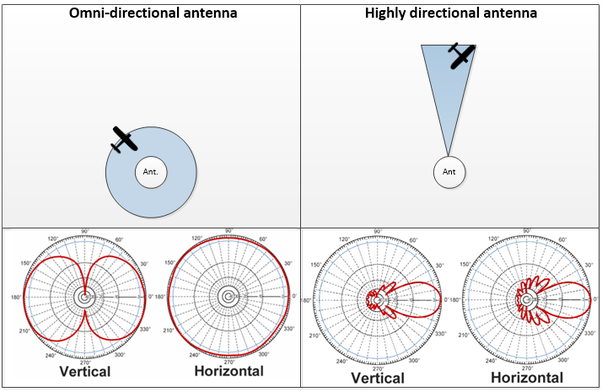 Obviously, the higher the power the greater the range. But devil’s in the detail…

Range is proportional to the square of the power. This means that doubling your power will only increase your range by around 40%.

So, don’t get too excited by all those power amplifiers out there.

5. The frequency being used

This is another critical factor as frequency plays a massive role on range.

The lower the frequency, the longer the range. As such, if you choose the frequency on your setup be aware that unless you’re in an area of significant interference in the 2.4GHz band, then 5.8GHz will not be your best choice.

To bring this to life, other things being equal 5.8GHz provides roughly half the range of 2.4GHz.

6. Reflective obstacles behind and around the control and drone

6. Interference from other RF sources.

7. The positioning of the antenna within the drone.

Most pilots experience signal issues when at range and rotating their drone. A likely reason is that the drone’s antenna’s radiation pattern is blocked by some of the drone’s circuitry.

Its useful to know that one of the worse blockers of RF are LiPo batteries, which is why it is advisable for antennas to be located under the drone and not within its shell.

8. Reflective obstacles behind and around the control and drone

Multipath is an issue that occurs when the signal reaches the receiver from multiple paths or directions. This would typically happen when the signal bounces off obstacles.

So, try to avoid setting up close to large obstacles, even if these are behind you and your line of sight to the drone is clear.

To make the most out of your flights, besides the mentioned systems and gear, never leave home without the following extra replacement parts and tools:

UAV SYSTEMS INTERNATIONAL is one of the best one-stop solution providers in the field of drones that can solve requirements worldwide. To know about the various RC Quadcopters click on Drone Store or if you have any questions, concerns, or comments, please fill out the form below or send us an email at support@uavsystemsinternational.com. We will try to get back to all inquiries within 24 hours.